Invasive species can have a significant impact on a native ecosystem. The LGLC is actively working to monitor and manage terrestrial invasive plants and insects that are established and negatively impacting our forests and shorelines, or are not here yet but expected to infest the Lake George watershed in the near future.

What Are Invasive Species?

Invasive species are plants, animals, and other organisms either accidentally or intentionally introduced from outside their historic range that cause harm to the environment, economy, or human health. In recent years, the rate and risk of invasive species introductions has been exacerbated due to increased movement of people and materials and increased environmental degradation. Due to the lack of natural predators in their new environment and high reproductive ability, invasives can quickly become widespread and out-compete native species. 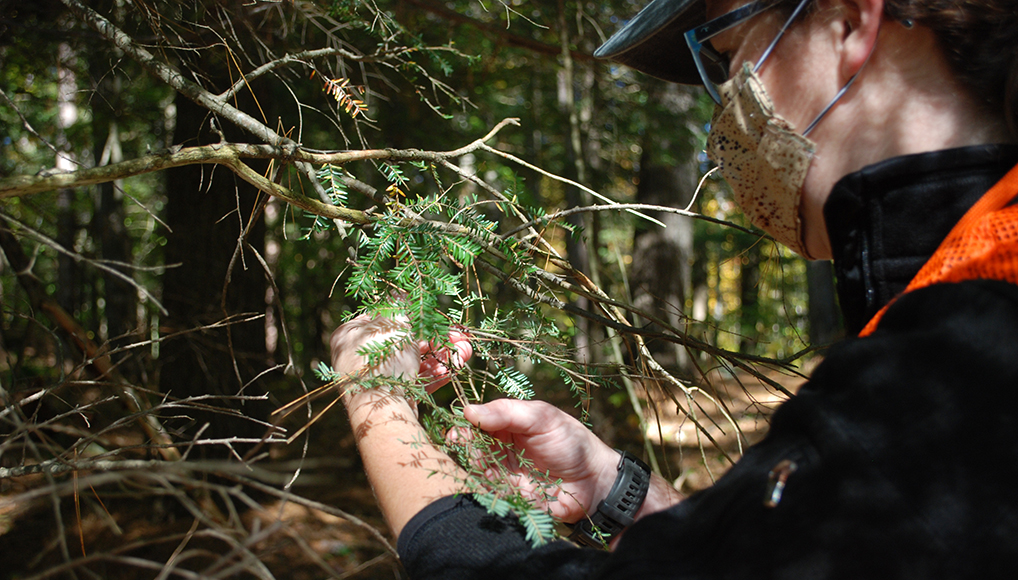 What invasives do the LGLC manage in the Lake George watershed?

The LGLC has been monitoring and managing terrestrial invasive plants throughout the watershed for more than a decade. There are many invasive plants well established here, but we focus our efforts on a handful that present especially significant risks to the surrounding habitat and water quality: shrubby honeysuckle, garlic mustard, purple loosestrife, Phragmites, and Japanese knotweed.

When identified on protected land, either owned by the LGLC or in cooperation with an easement owner or other partner, these invasives are managed through hand removal, cutting, or in some cases, use of carefully applied herbicide. For an example of a successful Phragmites management project on an easement property, see pages 18-19 of our 2018 fall/winter newsletter.

In addition to plants, the LGLC is working with our partners to manage invasive pests, particularly the hemlock woolly adelgid, an invasive insect that can decimate eastern hemlock forests.

What is the hemlock woolly adelgid?

The hemlock woolly adelgid (HWA) is an invasive forest pest that was introduced to North America from Japan. They are tiny, aphid-like insects that attach to hemlock trees and suck the moisture and nutrients from the base of the tree’s needles. HWA does not have any natural predators in the eastern U.S., and our hemlocks do not have a natural resistence to infestations.

Why does THE HEMLOCK WOOLLY ADELGID matter to Lake George?

The eastern hemlock, Tsuga canadensis, makes up an estimated 60% of total tree cover in the Lake George watershed. Commonly found along streams, hemlock roots stabilize streambanks, preventing erosion and drastically reducing the amount of sediment and excess nutrients that enter the lake.

Eastern hemlocks also provide food and habitat to many animals in the northeast. Brook trout depend on the cool water temperature that is maintained by dense hemlock cover. Chickadees, wrens, warblers, and other songbirds rely on hemlock for habitat. White-tailed deer, snowshoe hare and porcupines feed on its bark and needles.

Without the eastern hemlock, the water quality of Lake George, and the forest habitat of the watershed, would suffer.

An eastern hemlock can be most easily identified by its needles. They are flat with round tips, and have two distinct white lines on the needle’s underside.

HWA is very small and is most easily identified during the winter months when its eggs appear on hemlock twigs as “woolly” masses. 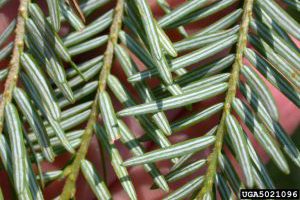 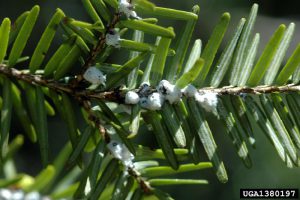 What IS THE LGLC DOING ABOUT HWA?

With special infrared mapping, the LGLC has identified locations of hemlocks within the watershed believed to be most at-risk and critical to monitor and protect.

On-the-ground monitoring is the most effective way to detect HWA infestations. Each year LGLC staff and volunteers walk more than 75 miles on protected lands within the watershed to check for signs of HWA.

Following the confirmed infestation of HWA within the watershed in 2020, the LGLC has been working with partner organizations (APIPP, Capital Mohawk PRISM, and DEC) to identify and monitor priority hemlocks throughout the watershed. In addition to monitoring our own preserves, we survey hemlocks on partner-owned public lands as well as several ecologically important private properties.

In 2021, the LGLC joined in a state-wide initiative to engage citizens in efforts to monitor for the invasive pest, hemlock woolly adelgid (HWA). As a result of this Adopt-A-Trailhead program, more than 100 trails were monitored regionally by nearly 400 citizen scientists, all of whom went through training for HWA identification and how to report their findings with iMapInvasives.

LGLC’s trained staff have assisted with the treatment of over 30 acres of infested hemlocks on Dome Island, Shelving Rock and Paradise Bay. We will also treat infestations if found on LGLC land (none found to-date).

The LGLC has hosted trainings at our office and in partnership with other groups, to help landowners, foresters and concerned citizens know how to monitor for and manage HWA infestations.

What are spongy moths?

For a second summer in a row, it appears that the pesky Spongy Moth (formerly “Gypsy Moth”) will have an impact on the region’s forests.

Spongy moths, Lymantria dispar, were first introduced to the U.S. from Eurasia in 1869, with the intention of using the species for silk production. The species failed to produce silk and without a natural predator in the U.S., the insect spread through the Northeast and into the Mid-Atlantic and Midwest.

In their caterpillar phase, spongy moths prefer to eat the foliage of oak species. In years of high spongy moth populations, they will also feed on the foliage of other deciduous trees and even evergreen needles. Otherwise healthy deciduous trees can survive 2-3 years of defoliation. These trees will usually lose their leaves to caterpillars in the spring, and re-leaf during summertime. Conifers that lose only some needles can typically survive as well; unfortunately, conifers that lose all their needles due to spongy moths will likely die.

If trees look dead and bare, the expert recommendation is to wait a year and see if the tree regains health and regrows, as long as the tree is not in a position that would cause property damage or injury.

Generally, spongy moth populations rise and fall in 15 year cycles. The “outbreaks” of spongy moths typically last two years before the numbers begin to drop again. Spongy moth populations are controlled by a bacterium found naturally in the soil, Bacillus thuringiensis, also called Btk, which can be purchased as a foliar spray for population control. There is also a virus that kills spongy moth caterpillars.

The species was recently renamed to better reflect the moth’s sponge-like egg masses in which the insect will spend most of its’ life, and to move away from the former name which derived from an outdated, ethnic slur. 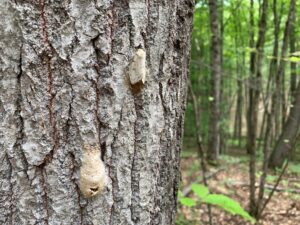 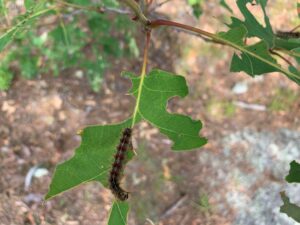 What can I do about a spongy moth infestation?

Past cycles indicate that outbreaks last two years before the spongy moth population plummets and the cycle begins again. In the meantime there are ways to protect the trees that are most important to you and stop the spread to help next year’s trees.

To protect your infested/defoliated trees this summer:

To control the spongy moth populations this year and in the future:

More information on population control can be found in a series of videos we created with the Adirondack Park Invasive Plant Program here.

You may also find more information from the NYS Department of Environmental Conservation’s spongy moth page.

What Are Other Species of Concern?

APIPP has established plots on ash tree stands throughout the Adirondack Park in order to monitor for the emerald ash borer (EAB), a bright green beetle that attacks all ash species.

One such plot is a stand of black ash at the LGLC’s Sucker Brook Preserve in Putnam. Black ash trees are rare in the Adirondacks, so this plot offers an important study group to the project. LGLC staff worked with APIPP to inspect the black ash stand and tag the trees for annual monitoring.

What Can I Do?

If you are interested in learning more about HWA, please contact the LGLC or check back here to see if we have any upcoming informational sessions. Knowledge is power!

You can look for infestations while you are out in the woods, or even in your front lawn. It only takes a few seconds to check the underside of a hemlock twig—but this short exercise could make a huge impact in protecting the health of our watershed. If you suspect that a tree is infested with HWA, please take a photo of the and email it to Monica at mdore@lglc.org with a note of its location. Or, you can create an account in iMapInvasives to submit your finding directly: 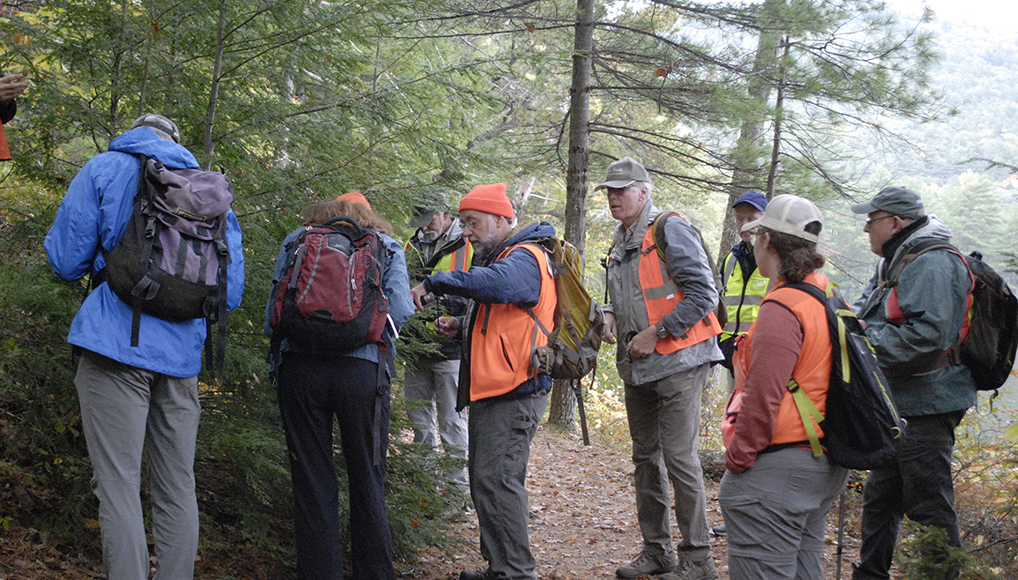 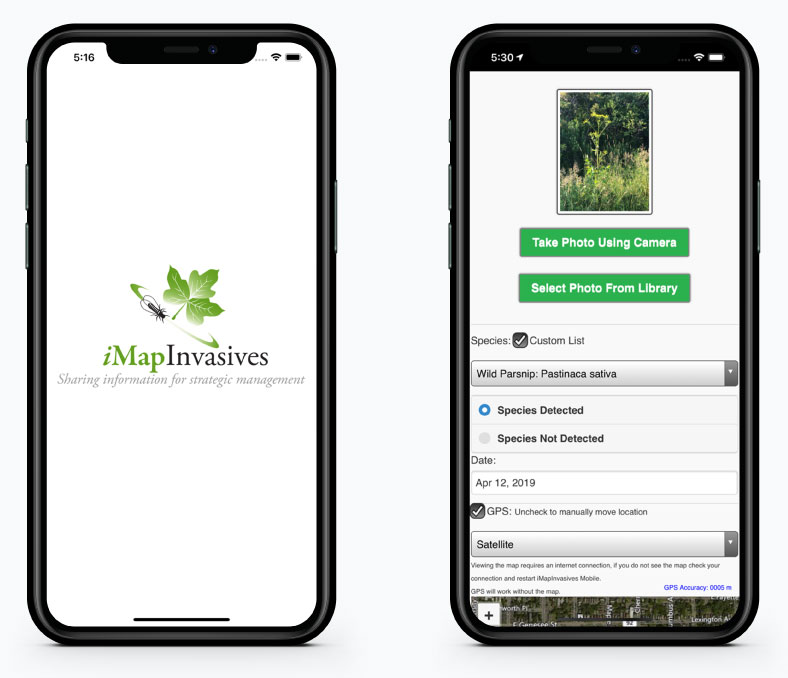 Field Guide to Terrestrial Invasive Species of the Adirondacks, a publication created and shared by APIPP.

Our partner in invasives management, the Adirondack Park Invasive Plant Program (APIPP) is a great resource for information on many invasive plants and animals within the Adirondack Park and New York State. Visit their website for searchable databases of terrestrial and aquatic invasives, downloadable info sheets, and training events planned throughout the year.
@hikelakegeorge
@lglc_stewardship
Finally winter is here and so is our latest merch!