From its entrance on Bluff Head Road, a short (0.15-mile) wooded hike leads to a viewpoint overlooking the narrows and Silver Bay on the western shore. The easy hike provides a great way to see a part of the lake that has few other points of public access. A picnic table may also be added at the viewpoint in the future.

The remains of a collapsed cabin are very near the viewpoint; please stay on the marked trail and avoid exploring these remains.

The uplands also share a 1/2-mile boundary with Spruce Mountain, owned by New York State, though there are no connecting trails at this time.

Limited parking is available by the road, at the preserve entrance; a larger parking area may be developed in the future. 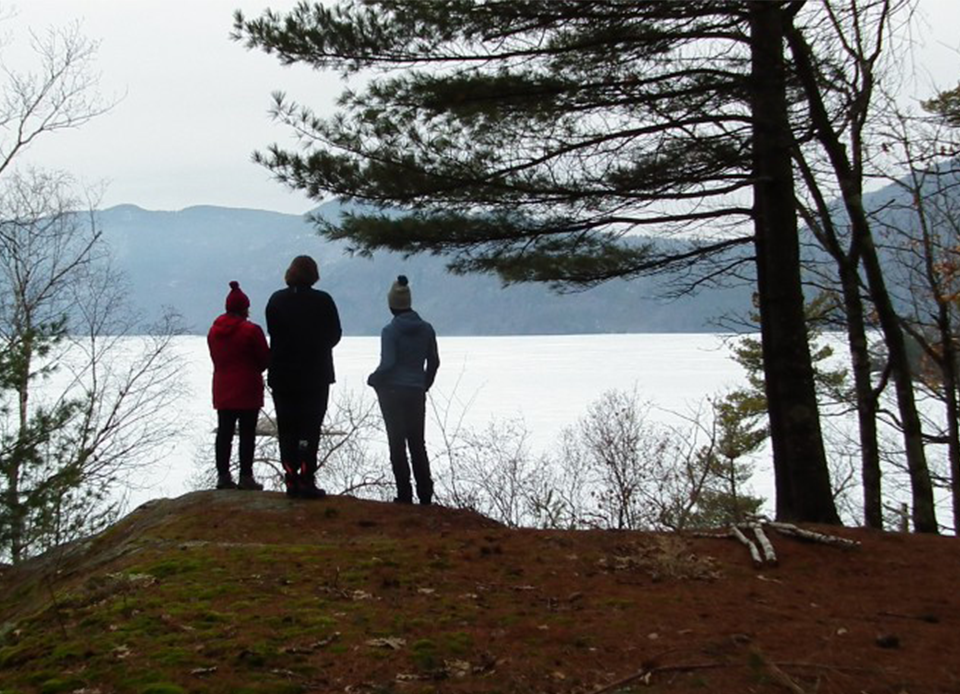 Please park only in the designated area.

On Friday, September 7, 2018, the LGLC officially marked the opening of the Leeming Jelliffe Preserve in Huletts Landing with a ribbon-cutting ceremony attended by local community members and key supporters of the project.

Zoning would have allowed the construction of up to four new homes on the land, but the owners welcomed the possibility of protecting the land that has meant so much to them and their family.

Helena “Bunny” Wilkening’s grandparents, Dr. Smith Ely Jelliffe and Helena Dewey Leeming Jelliffe, bought 125 acres of land in Hulett’s Landing in the early 1900’s. Over time the land was divided between their children; Ms. Wilkening’s mother, Winifred, was given land that Ms. Wilkening then inherited, including the property which is now the Leeming Jelliffe Preserve, named in honor of those who first protected it.

The 33.3-acre upland preserve was purchased by the LGLC in April, 2018, thanks in large part to a timely and generous donation by Paul and Sylvia Jelliffe Lawler, which was matched by Paul’s employer, the W. K. Kellogg Foundation. The donation also made possible the purchase of a conservation easement on an adjoining house lot with over 600 feet of Lake George shore front.