THE SCHUMANN PRESERVE AT PILOT KNOB

Though the hike to the top is moderately steep, hikers are rewarded for their efforts with a shady rest at the preserve’s gazebo and expansive views of Lake George and the Adirondacks.

The orange trail leads from the parking area for a steady 0.7-mile ascent of 620 feet to the gazebo and scenic lookout. This trail underwent a renovation in 2018 and 2019; the installation of rock steps and proper grading reduces erosion and stormwater issues. Even with these updates, please be aware that sections can still be muddy and rocks slippery after a rainstorm. Wear appropriate shoes (including spikes in winter, if necessary) and NOT walk around impacted areas, as it erodes trails and damages trailside vegetation.

Just south of the gazebo the blue trail leads further east for a more gentle hike through hemlock and oak forests and grassy meadows. After about 0.9 miles you’ll come to the head of the waterfall loop. Follow the trail south for 0.1 miles to the base of the waterfall or head northeast to climb to the top. The waterfall is seasonal and though active in the spring, it is often dry in late summer and fall. 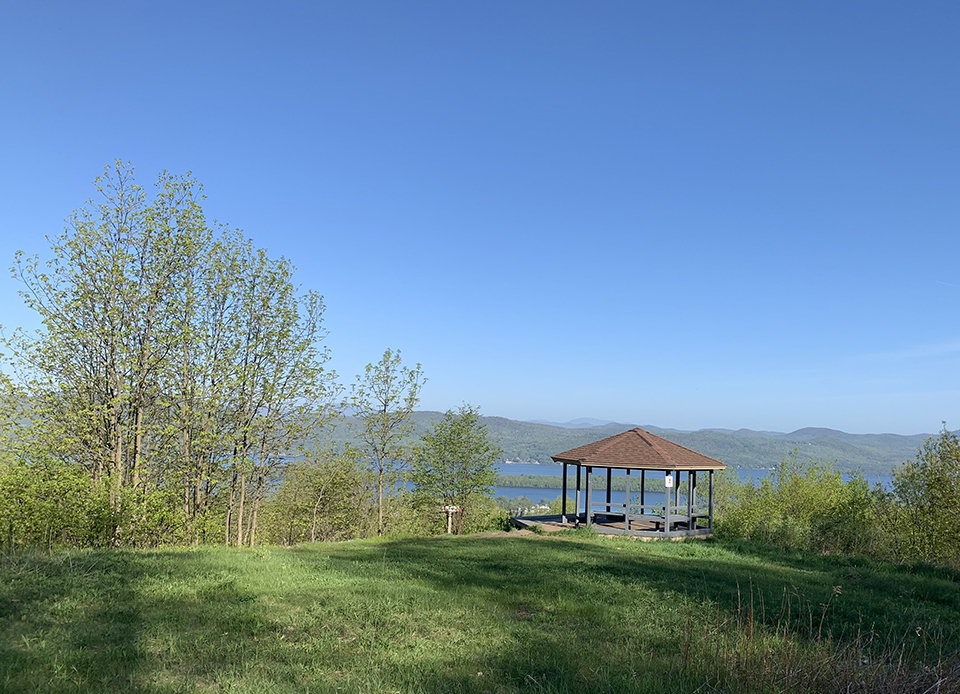 Please park only in the preserve’s designated area. If the lot is full, do not park on the road; please come back another time.

After more than a decade of planning and negotiation, the 223-acre preserve was added in August 2000 to the list of protected lands within the Lake George basin.

Originally, this parcel was illegally cleared and a house and mile-long driveway were constructed. The five-acre house lot became a focal point throughout the south basin, because it disrupted the unbroken wilderness of the Pilot Knob range. Further proposed development would have greatly changed the quality and character of the entire basin.

The property was subsequently confiscated by authorities and resold to the Zug family who stewarded the land for over 10 years. With the help of hundreds of donors and a selling price well below market value, the Lake George Land Conservancy was able to purchase the property from the new owners.

This property, first named the Pilot Knob Ridge Preserve, was renamed on August 9, 2010 at a dedication ceremony in honor of LGLC’s past executive director, Lynn LaMontagne Schumann, who was instrumental in its preservation. Lynn passed away from breast cancer on March 13, 2010.

“My greatest moment,” Lynn said, “came after we purchased the preserve. The organization made a significant decision to remove the house situated prominently on the hillside. It was a sunny spring morning when the wrecking crew began the process of demolishing the house. I peered out over the ridge and saw some 40 boaters anchored along the shoreline cheering as the house came down.”