The three trails of Cook Mountain Preserve offer a variety of experiences for hikers of all ages and abilities.

Starting from the parking area and kiosk the yellow trail follows a wide flat path into the preserve. After about 0.12 miles the trail’s loop begins.  Stay straight to follow the trail another 0.4 miles along a gently climbing path (which turns into a dirt road) to its junction with the Ridges Trail, or turn right to wind along the shore of what was once an active beaver pond.  The absence of beavers resulted in a breached dam and loss of water; grasses and shrubs recolonized the pondflat, and it is slowly returning to woodland.  After about 0.2 miles, the trail joins the Ridges Trail, marked with red round disks.

The Ridges Trail ascends steeply – 680′ over 0.5-mile – then climbs more gradually for the remaining 0.6 miles to an elevation of 1,213′.  A short loop to an eastern view into Vermont is reached after 0.75 miles from its base.  Continue following The Ridges Trail to its end for a fantastic, clear view down Lake George.  Flat Rock and Anthony’s Nose can be seen on the left, and Rogers’ Rock on the right.

For history buffs, there is a new blue trail that takes you to a cemetery that dates to the Civil War.  It is reached from the yellow trail about 0.15 miles past the beginning of the loop. 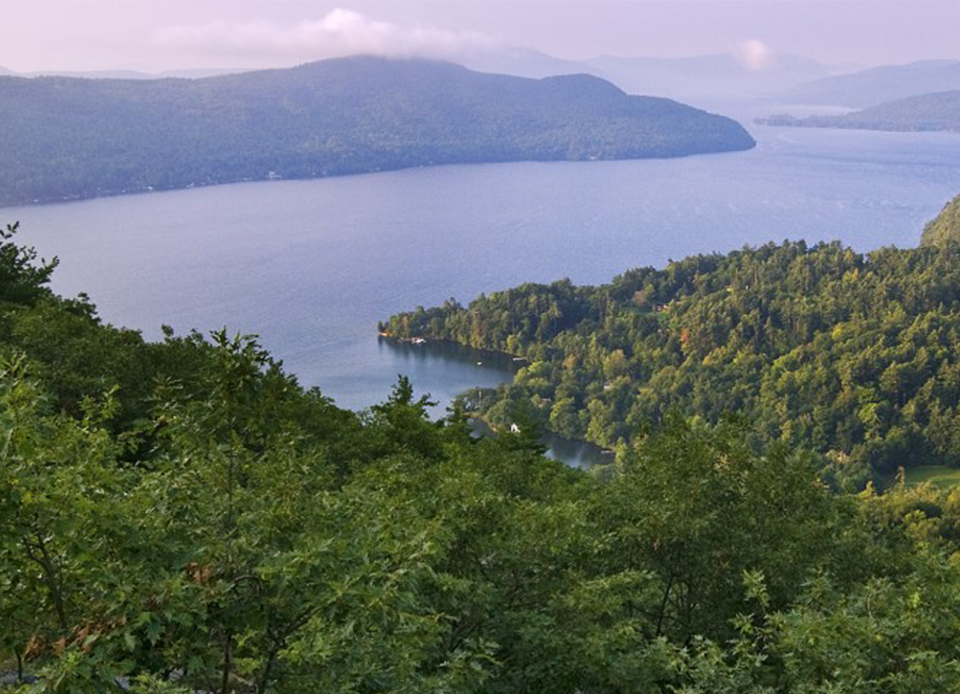 Winter hikers: note that the parking lot does NOT get plowed.

Off-street parking is available but limited. Please use caution when parking and be mindful of traffic.

Cook Mountain was purchased in 1876 by George Delano. After attending business school and then running a diner in Poughkeepsie, George moved to the northern end of Lake George to farm the slopes of Cook Mountain. He maintained a “sugar bush” for maple syrup and two apple orchards, shipping the fruit to New York City.

The Cook Mountain Preserve was established through the generous donation of 176 acres by Donald and Marjorie Delano, George’s grandchildren, to the Lake George Land Conservancy in 1990. In 1995 the preserve was expanded by an 18-acre addition donated by Dr. and Mrs. George Boyle. The preserve harbors a variety of habitats, from moist wetlands and overgrown farmland to mixed hardwood/coniferous forest and dry rocky-summit grassland.

Beavers once inhabited a portion of the preserve, constructing a series of dams and transforming the stream into lush wetlands and two small ponds. This area provides a good example of succession now that the beavers are gone, as the wetland slowly changes to a beaver meadow.

Watch for stumps and old beaver chew marks on the trees bordering the ponds, as you walk along the old railroad bed that passes through the lower portions of the preserve.

New to hiking, or just need a refresher?
Check out our Hiking Basics for Beginners page for lots of tips on how to enjoy a successful hike.
@hikelakegeorge
@lglc_stewardship
Looking back at some highlights from Amy’s Adven

Yesterday was our last discovery series of the sea

📢: @nysdec in partnership with the @ltalliance

Back by popular demand! Join us for an evening wal