Please note: Information provided here was accurate as of 2015 and trail conditions may have changed since written. This property and its trails are owned and managed by the NYS DEC, not the LGLC. If you encounter issues on the trails please contact the local DEC Forest Ranger Evan Donegan at 518-656-9086 or the DEC Regional Office at 518-897-1300.

Access to the Berry Pond trails is gained through the Village of Lake George’s Recreation Center trail system.  From the kiosk, follow the trail with LGLC’s blue markers through the Rec. Center trail system.  Look carefully for a number of directional changes.  After making a sharp left turn, the blue trail ascends 280 feet over 0.4 miles to the Berry Pond land boundary. It then descends gradually for another 0.2 miles to the intersection with the orange trail. Hikers can then choose to continue along the blue trail for scenic views or the orange trail to Berry Pond itself.  Please note that the orange trail also serves as a snowmobile trail, so use caution in the winter.

The blue trail climbs 520 feet over about 1 mile to reach views looking north at Lake George (1,620-ft elevation) and south at Butler Pond and Vermont (1,640-ft elevation). It then descends gradually on a dirt road to reconnect with the Orange trail just north of the Berry Pond loop. As noted on the map, the blue trail makes two sharp turns. Please look carefully for these directional changes.

From the initial junction of the orange and blue trails, the orange trail follows a dirt road for 0.56 miles (300-ft elevation gain) to the second junction with the blue Trail. The orange trail then leads southwest for 0.1 miles along a dirt road to the Berry Pond loop. Following the loop clockwise, the trail continues along the dirt road for approximately 0.25 miles before cutting into the woods for a forested, pond-side trail for the remaining 0.75 miles of the loop.  Note: use caution where the trail crosses below the beaver dam.  During high water, it may not be passable. 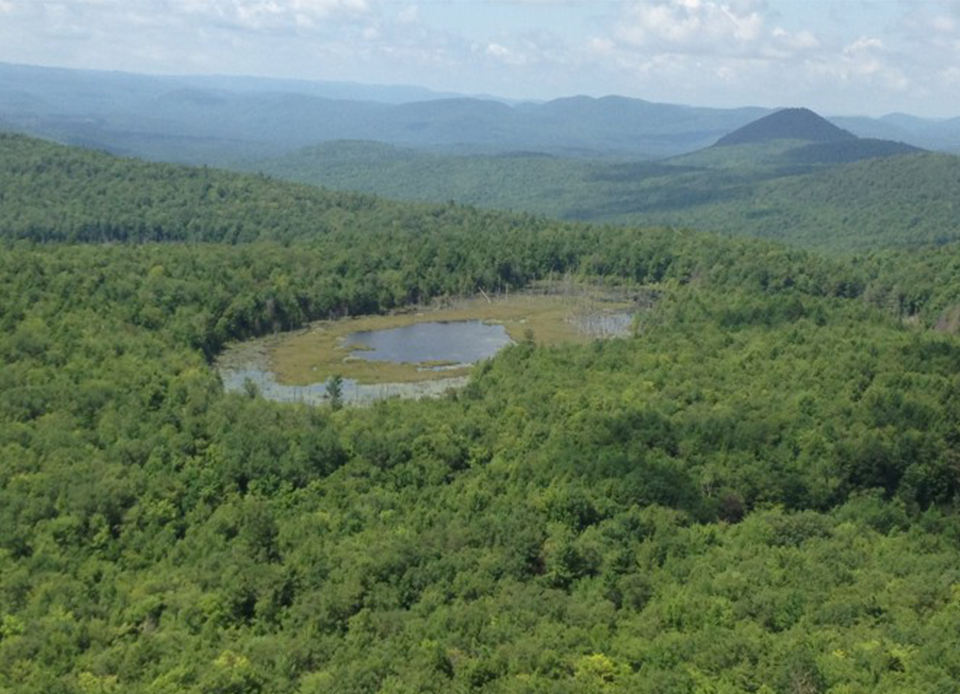 Motorized recreational vehicles are NOT allowed, except for snowmobiles on designated trails.

Please park only in the preserve’s designated area at the Village of Lake George Recreational Center lot.

Hunting and trapping is permitted according to New York State regulations. Please use caution when hiking during hunting seasons: wear bright colors and hike in groups. Hunters – please be aware of hikers and hunt away from trails. Please follow NYS DEC’s Hunting Safety Rules

LGLC purchased the Berry Pond tract on January 22, 2008, for $2.654 million, marking the largest dollar purchase in LGLC’s history at that time. The purchase was made possible in part through a loan from the Open Space Conservancy (OSC) and funding provided by the Helen V. Froehlich Foundation.

On March 26, 2015, LGLC sold Berry Pond to the state and it is now part of the New York State Forest Preserve. Read the NYS press release.

The Preserve includes Berry Pond, a pristine wetlands and open water wilderness that is home to an active beaver community and contains a small great blue heron rookery. The highpoints of the land provide expansive views of Lake George to “the Narrows” and southern views to Butler Pond and the lower Adirondacks. Situated adjacent to the existing Lake George Recreation Center, the Berry Pond tract will provide significantly expanded outdoor recreational resources for residents and area guests.