Posted at 14:03h in People, Press Releases by Sarah 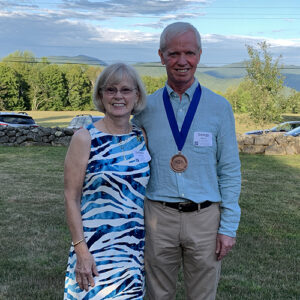 Mrs. Hoffman was nominated for the Rowan Award in recognition of her gracious hospitality and generous donation of time and support to the LGLC. She began volunteering for the LGLC in 2010, a few years after she and her husband bought their camp in Bolton Landing. Her involvement deepened when, in 2012, she joined the Board of Directors and actively participated in multiple committees until her term ended in 2021. Mrs. Hoffman has dedicated more than 800 hours to the LGLC, helping with everything from basic office mailings to providing major assistance with the Lake George Hike-A-Thon, as well as hosting LGLC gatherings at her family home. She continues to serve on the LGLC’s Advisory Board.

The Rowan Award is given annually to recognize exemplary individuals and organizations for their conservation efforts around Lake George, following the spirit of its namesake, Henry M. Rowan, who received the inaugural award in 2003. Mr. Rowan’s daughter, Ginny Rowan Smith, who is also a member of the LGLC Advisory Board and Trustee Emeritus, presented the evening’s award to Mrs. Hoffman.

LGLC Executive Director Mike Horn presented an Apperson Society medal to George and Anne Morris, which was accepted by George on behalf of himself and his wife who was unable to attend. George is LGLC’s Vice President of Finance and Treasurer. In addition to his volunteer service on the Board, he and Mrs. Morris have hosted LGLC gatherings at their home for several years and have been substantial supporters of the LGLC’s programs.

The Apperson Society was created by the LGLC in honor of John Apperson’s passionate land conservation efforts for Lake George. Perhaps best known for his purchase and then donation of Dome Island for its permanent protection in 1956, Apperson’s legacy of conservation is can still be seen today.

To carry on Apperson’s vision of a wild and protected Lake George, Apperson Society members are individuals, families, foundations or organizations that donate leadership gifts valuing $100,000 or greater to support land conservation in the Lake George watershed.

The LGLC’s President’s Reception was held at the Bixby Family’s Federal Hill Farm, a private residence in Bolton Landing. About 100 people gathered at the event, which is held each year to thank those who demonstrated significant support of the LGLC over the past year. The event has been generously underwritten each year by Lora and Craig Treiber.